Explanations for why banks leave excess collateral with the ECB range from
1) perhaps an easy way of signalling that they have a certain amount of unencumbered assets
2) leaving assets at ECB might be safer than at other custodial bank (free and safe custodial services)
3) extra-collateral may only be extra in some part - if total collateral is measured free of haircuts then real "excess" (assuming say a 20% blended haircut on ECB assets) should be reduced by the the average blended haircut.

The average percentage of excess collateral actually increased in 2011 (though by year end when lending dramatically increased this might not be the case).  To the ECB this mean that "at least at the aggregate level, the Eurosystem's counterparties experienced no shortage of collateral."  Of course such a claim is somewhat meaningless given what we know about the balance sheet of various NCB's.  German banks are swimming in excess liquidity while there is little to be found in Italy - by the same token it is likely that German banks post much of the excess collateral and Italian banks post very little (though it is hard to verify this since the ECB does not release this data).

On the right hand chart note the change in composition of assets.  While observers might not be surprised that "non-marketable assets" jumped as a % share of posted collateral, they might be more surprised to know that this figure is not influenced at all by the change in collateral rules which widened the scope of acceptable credit claims (non-marketable assets).  Those changes only took effect in 2012, so it is likely that a current snapshot of collateral posted with the ECB would show that the percentage of credit claims posted is even higher than the average for 2011. 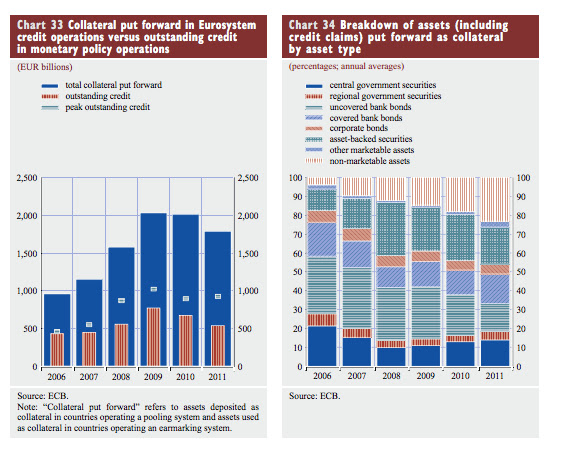 Also of note - uncovered bank bonds declined as a percentage share of posted collateral mainly because many such bonds became ineligible as state guarantees from the first financial crisis wore off.  I wonder whether the ECB's decision to allow unlisted bank bonds starting in on January 1, 2012 was in response to this and also whether, as a result, the share of uncovered bank bonds posted during 2012 will rise again?
Posted by Unknown at 1:21 PM