The ECB has released a flood of data in the past couple of days.  Here is some interesting stuff from the Bank's report on "Financial integration in Europe."

Chart 54 demonstrates the deterioration in cross border collateral posting in Eurosystem operations since the onset of the crisis.  Cross border collateral posting occurs when a bank in one country, say Germany, buys a loan or security in another country, say Spain, and then finances it by accessing Eurosystem refinancing at the Bundesbank.   From the ECB 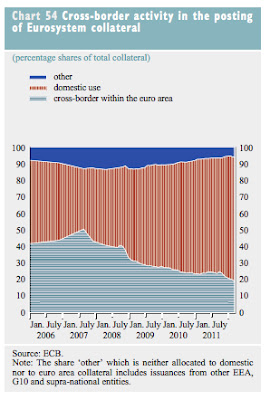