This approach has vastly lower risk, better conditionality, and conserves resources for a real emergency.


If Spain/Italy yields are "unsustainable" because they are 3% too high, then just pay the 3% from EFSF/ESM/EU as a subsidy and let them finance in the market.
To avoid risk of having to pay very high subsidies, the EFSF/ESM/EU can backstop bond auctions at, for example, 9%.

Benefits:
- Vastly reduces risk: Instead of holding large credit positions,  the cost of this subsidy for €300bn of debt would be €9bn/year, but only for as long as the market misunderstands that Spain/Italy are better credits. The cost of subsidizing €2 trillion of debt is the same as the cost of EU agriculture subsidies.
- Reduces pressure on Target2 creditors since they don't have to assume this additional risk.
- Conditionality works much better since Europe dispenses the benefit over time instead of up front.
- Highlights how small are amounts that are claimed to cause unsustainability.
- Eliminates subordination risk.
- Retains market information, which is the first step to appreciating that information.
---- Perspectives would have changed had it been shown that Spain could have financed the  €100bn for bank capital in the market.  The suggested approach allows this to be attempted without risk of disaster.
---- The market is often wrong, but should not be dismissed.   When the market appears wrong, it's a good exercise to try to figure out why it might not be.  Analysis of Greece would have benefited from this; same for Spain.  Destroying this information makes it impossible to consider it.

The headline of a Reuters story.  Hard to square with the following chart (which includes 2012 data through May). 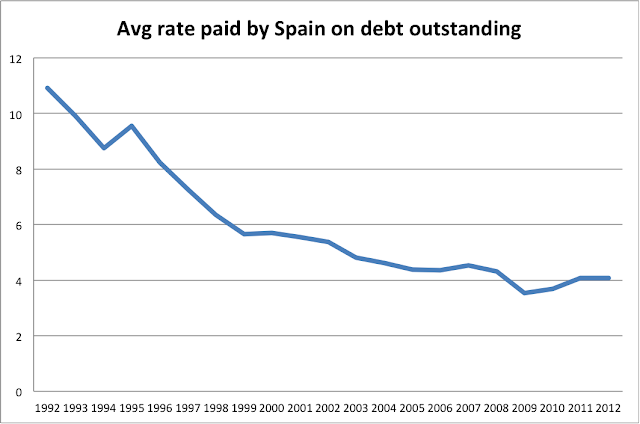 Source: Spanish Treasury
Posted by Unknown at 9:42 AM 1 comment:

Email ThisBlogThis!Share to TwitterShare to FacebookShare to Pinterest
Labels: Spain

Spanish banks vs. rest of world

Yesterday's post offered some data on recent developments in Italian banks - today a graph on a recent evolution in the Spanish banking sector that has seen Spanish banks go from a net borrowing position vs. the world outside of the Euro area to a net lending position: 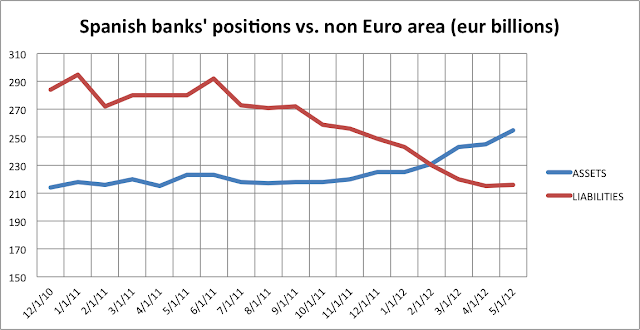 Source: Bank of Spain
Posted by Unknown at 12:59 PM No comments:

We all remember how the LTRO was supposed to spur lending to the real economy.  A quick update on that from Italy, the second biggest consumer of LTRO borrowing (after Spain).

Since the October announcement, banks resident in Italy have added 242 billion euros in assets to their balance sheet.  What has accounted for most of that asset growth? 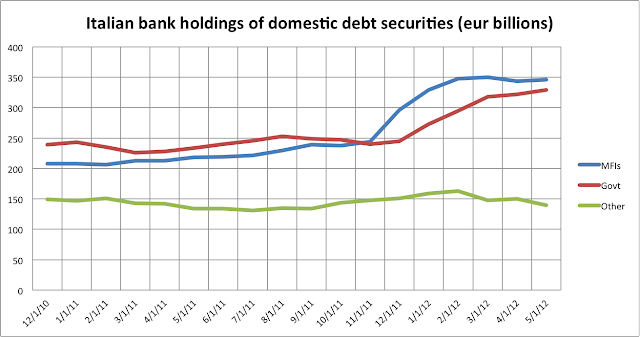 Italian banks added 108 billion in securities of other Italian banks which increased such holdings by 44%.  During the same time they added 82 billion in Italian government debt or a 32% increase.  Meanwhile, holdings of non-bank, non-sovereign securities declined by 4 billion euros over the same period.  Other traditional lending to the non bank, non government sector also declined over the same period by 12 billion euros.

At the ECB's July 5th meeting it was decided to extend additional collateral claim eligibility to the Greek central bank.  Criteria for eligibility is to be announced on the Greek bank website.  In addition, the central banks of Cyprus, Italy and Portugal had their ACC frameworks extended.

Posted by Unknown at 3:34 PM No comments:

From the EBA sovereign capital exercise conducted last year and announced in October.

Used in a sentence:

Posted by Unknown at 5:26 PM No comments:

Can you spot the problem countries?

Counterparties that issue eligible bank bonds guaranteed by an EEA public sector entity with the
right to impose taxes may not submit such bonds or similar bonds issued by closely linked entities
as collateral for Eurosystem credit operations in excess of the nominal value of these bonds already
submitted as collateral on the day this Decision enters into force.


This means that banks may no longer issue debt to themselves, pay the government a guarantee fee, and then pledge those securities to their local NCB for financing.  Italian banks issued these after an enabling law was passed by PM Monti's new government in December.    As of March, €77 billion was borrowed from the Bank of Italy using this collateral.

The ECB's decision to expand collateral rules for certain asset backed securities may have attracted more attention, but this change could be more important.
Posted by Unknown at 5:02 PM No comments: