In a WSJ Op-Ed today, former Fed Vice-Chairman Alan Blinder writes that the Fed should cut the interest it pays on excess reserves so that banks will have more incentive to lend them out:

"At this point, you're probably thinking: 'Wait. If the Fed charged banks rather than paid them, wouldn't bankers shun excess reserves?' Yes, and that's precisely the point. Excess reserves sitting idle in banks' accounts at the Fed do nothing to boost the economy. We want banks to use the money."

The topic was discussed at the Fed's most recent meeting, as noted by the minutes:

"...most participants thought that a reduction by the Board of Governors in the interest rate paid on excess reserves could be worth considering at some stage, although the benefits of such a step were generally seen as likely to be small except possibly as a signal of policy intentions."

Blinder's idea sounds good - but it's based on a misunderstanding.  The presence of so many excess reserves is an accounting by-product of the Fed's asset purchases; it tells us virtually nothing about the state of bank lending or whether banks are "us[ing] the money". This identity was nicely described by NY Fed researchers Todd Keister and Jamie McAndrews in a 2009 paper.

Lets hope the current FOMC understands how this works.
Posted by Unknown at 11:44 AM No comments:

ECB's Asmussen: "banking union is just the first start" toward fiscal union and then political union. "And that is what we are going to do in Europe"

55:15
Interviewer: ...[I]s there a message about the European Central Bank, about its mission, its goals, and its outlook, that you want to make sure this audience understands before you get on the plane and head back over the water?


Asmussen: ... We are deeply convinced that we need to integrate Europe further, where we have an incomplete monetary area. It’s in economic terms an unstable equilibrium. And we need to move this construction to a new stable equilibrium, and this in my view means more integration. And banking union is just the first start. We then need to continue… a true economic union, a fiscal union, a democratically legitimized political union, so to really, to complete EMU. And if one is not willing or not able to go down this route, it can be both, willing and able, then we will disintegrate. This could lead in economic terms to a stable equilibrium, but in my view at much lower welfare levels. So I would really say, let’s go down the whole way, banking union is just the first step. We should not stop there. I of course know all the skepticism towards more European integration. I can read polls as you can read polls for the European elections. But in my view political leadership is not that you look at the polls, say, ‘oh this is very difficult, the people don’t want it, so we don’t do it.’ I think political leadership is exactly the opposite, that one has a goal, explains why this is a good goal, names the pros and the cons and then simply then goes out and fights for it. And that is what we are going to do in Europe.
Posted by Makepeace at 9:33 AM No comments:

The New York Fed, on its well-written blog, Liberty Street Economics, has posted Capital Flight in the Euro Area - NY Fed Research.   The post describes capital flight in the euro area during the crisis, and the accommodation of the flight in the Target2 payment system.   Their description is hard to square with the graph below which shows capital flight from Spain to be negatively correlated with the level of stress.   For example, capital flight in a low stress month, March, was four times as large as during November, the highest stress month in the period shown.  The data for all of 2011 and 2012, for Spain and Italy, more broadly show unexpected timing of capital flight.

We will pay $5,000 to the first person who, in the next week, correctly explains the conceptual error in the blog post that is highlighted by this riddle.  (Persons who have heard the explanation from us aren't qualified for payment but are most welcome to respond.)   Please submit answers to wolfgang@antehoc.com. 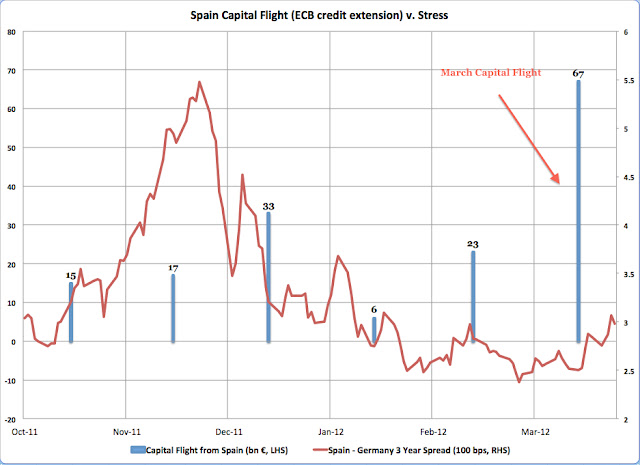 From the Archives, this circulated in April, 2010 - A Parody of the SEC's Goldman Sachs Complaint. (The footnotes are factual, as is the Bloomberg quote on Paulson and the graph of subprime prices.)