Speaking in London Thursday (at 8:53), ECB President Draghi made the following claims about the impact of the three-year LTROs  (deviations from the ECB published text are in red  (published text):

"In late 2011 and early 2012 we launched two 3-year long term refinancing operations which we called LTROs. These operations [Our LTROs]  gave banks sufficient reassurance that access to liquidity will not be a problem over a relevant planning horizon. We injected about €1tr, gross injection of liquidity with two operations which took place, one in January [sic] and the second in February of 2012.  60% of this has been repaid already. Without these operations, banks would have defaulted on their maturing obligations or would have discontinued and withdrawn existing credit lines to companies. One should remember that in the first quarter of 2012 €230bn of bank bonds were maturing and more than €300bn of soveign bonds were maturing.  That's why banks in fact stopped giving credit starting in July of 2011, and that's where a good deal of the current credit crunch comes from.  The LTROs therefore helped to avoid a major credit crunch."

This is consistent with previous claims Draghi made about how the LTROs prevented a credit crunch due to refinancing difficulties in the first quarter of 2012:


But Draghi's claim, that the market dysfunction seen in November 2011 was due, in part, to an inability by banks to predictably access term financing, cannot be true for the following reasons:
The difference in term between the three-year LTRO and and these instruments is meaningless in the context of preventing an imminent disorderly deleveraging in the first quarter.

In addition, the three-year is not really a "long term" repo:

[1] If the ECB returns to its pre-October, 2008 mode of variable-rate tenders, and a period of stress comparable to the fall of 2008 occurs without a concomitant return to the fixed-rate, full-allotment policy, the LTRO may offer a microscopic benefit to its users.

The European crisis in late 2011 centered around Italy where short-term spreads were rising rapidly.  Concern over the increasingly erratic behavior of the long-serving Italian Prime Minister, Silvio Berlusconi, combined with fears about Italy's high level of public debt to create a panic.  The circus of Berlusconi's leadership is well captured by this smirk, shared by then French President Sarkozy and the German Chancellor Angela Merkel at an EU crisis summit in late October 2011. 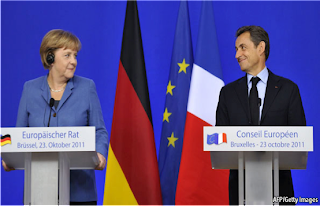 Mr. Berlusconi's replacement by the technocratic Mario Monti was a significant change.  For one, the risk of the Berlusconi doing something dramatic, like pulling Italy out of the Euro or defaulting on Italy's debt, was immediately reduced.  In contrast, Mr. Monti first step was to appoint a cabinet of technocrats and to propose an agenda of structural reforms.  A simple event study suggests that the drop in Italy's rate of borrowing was far more likely caused by Mr. Monti's arrival than the LTRO: 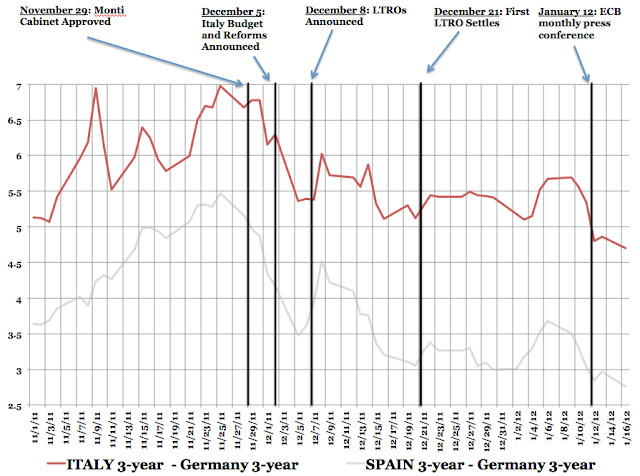 While the above chart certainly proves nothing, the question remains: is it more likely that Italian spreads fell in late 2011 because of a central banking instrument that offered financial institutions no new benefit or a radical change of government in Italy?