***Updated Does Spanish downgrade mean increased haircut at the ECB?


Update #2
Despite being downgraded by Moody's Spain is still rated above BBB+ by the rating agency DBRS which is also an approved "ECAI" (external credit assessment institution).  In addition, according to JPMorgan the total amount of collateral pledged at the Bank of Spain which is a government obligation or guarantee is 245 billion (higher than I might have guessed) meaning a collateral call would cost Spanish banks upwards of 12 billion euros.

In general collateral posted in ECB repo operations qualifies for a higher haircut when its rating drops to BBB+.  The rise can be seen below by comparing the top and bottom highlighted boxes. (Note that sovereign bonds fall in Liquidity Category 1).  A rating below BBB- is supposed to remove an asset from the eligible list but sovereigns have generally been exempted from that. Spanish bonds are currently in the top category, but risk being demoted to the lower group after S&P downgraded the nation's rating to BBB+.

Luckily for Spain, for sovereigns at least, the ECB applies the "First Best Rule" which means that it will take the best rating from the approved source rating agencies. Since Fitch and Moody's still rate Spain above BBB+, it is safe from the higher haircuts - but both have the sovereign on negative watch, so it is possible the ECB will soon be forced to decide whether to raise haircut requirements on the Spanish sovereign bonds. 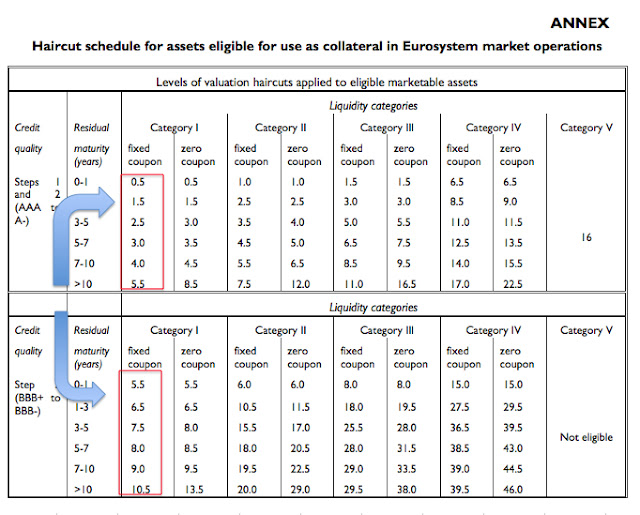