ECB President Mario Draghi explained that the OMT program to buy sovereign bonds was within the ECB's mandate because unfounded fears of a euro exit had caused excessively high yields in Spain and Italy. Speech to the Bundesverband der Deutschen Industrie, September 25, Berlin:

"In recent months, we have seen highly divergent borrowing costs for the real economy in different parts of the euro area. In our analysis, these differences were larger than justified by individual credit risk. They reflected, to a considerable extent, unfounded fears about the future of the euro area.
For example, a loan to a family in Germany for a house purchase with a five- to-ten-year maturity had an interest rate of 3%; the rate for a comparable borrower in Spain was 7.5%. At the same time, the average firm in Germany paid around 3% for a new loan over five years, while the average firm in Italy paid above 5.5%.
In these circumstances, monetary policy cannot work properly. This is because a key channel through which the ECB ensures price stability is through the cost of credit, in particular bank credit. Bank credit accounts for about 70% of external financing of euro area firms, and that ratio is even higher for smaller enterprises.
But if we are unable to influence borrowing costs in some parts of the euro area, this channel is disrupted. Firms and households have less access to financing, economic growth stalls and these regions are faced with a risk of deflation. In other words, our ability to ensure price stability for the whole euro area is compromised.
The ECB’s Governing Council therefore faced a choice: to accept this situation and allow the singleness of its monetary policy to be undermined; or to take actions within its mandate to restore the normal transmission of monetary policy across all parts of the euro area. We decided in favour of the latter."

"For example, a loan to a family in Germany for a house purchase with a five- to-ten-year maturity had an interest rate of 3%; the rate for a comparable borrower in Spain was 7.5%."

The ECB picks the red line to demonstrate the presence of convertibility risk: 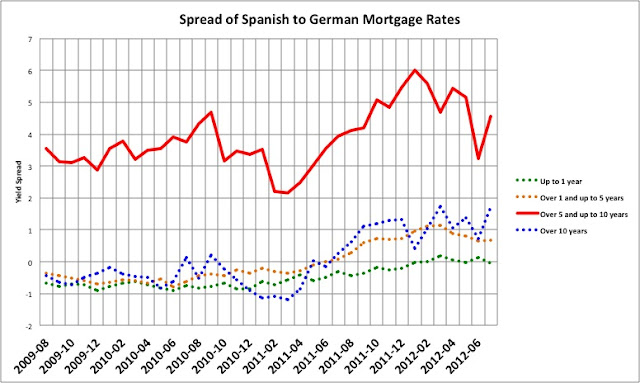 The ECB chose a persistent outlier to make this point. Both longer and shorter maturities had much lower rate differences than did their category.

The fact that most new Spanish mortgages appear to have maturities of up to one year should not surprise us. As the European Mortgage Federation observes, the vast majority of outstanding mortgages have rates that float to Euribor. The Banco de Espana notes, "a 15-year loan at an annually revisable rate is classified under the term 'Up to one year'."

While the difference between five-to-ten year Spanish and German mortgage rates in July was 4.5%, it was between 0% and 1% for the categories with reasonable volume in Spain.  We can fit both convertibility risk and "individual credit risk" into a 4.5% spread, but less easily into a 1% spread.

Though the chosen series has meaningful volume, the over five-year spread, 2.5%, is twice as large as the up to one-year spread.

The ECB has pointed to Spanish mortgages and Italian corporate loans as cases of a convertibility premium. Such a premium should manifest in all Spanish rates, including corporate loans.

We present the spreads of corporate loans in Spain over Germany, which the ECB did not discuss. Notice that there are no outlying series. 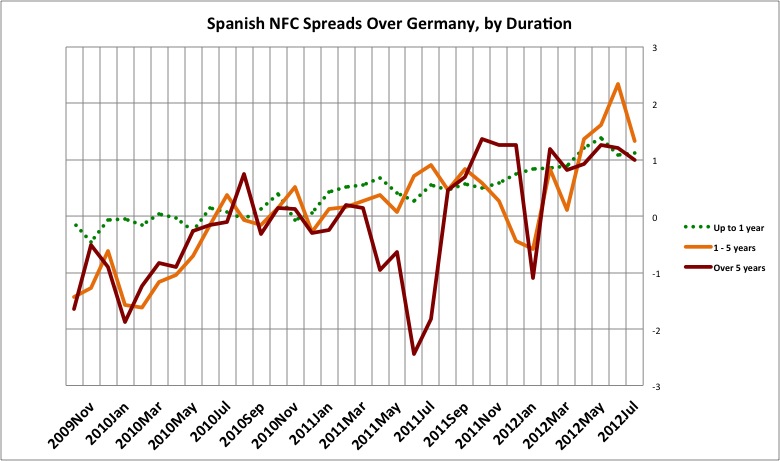 Now let us compare the spreads of both countries to Germany: 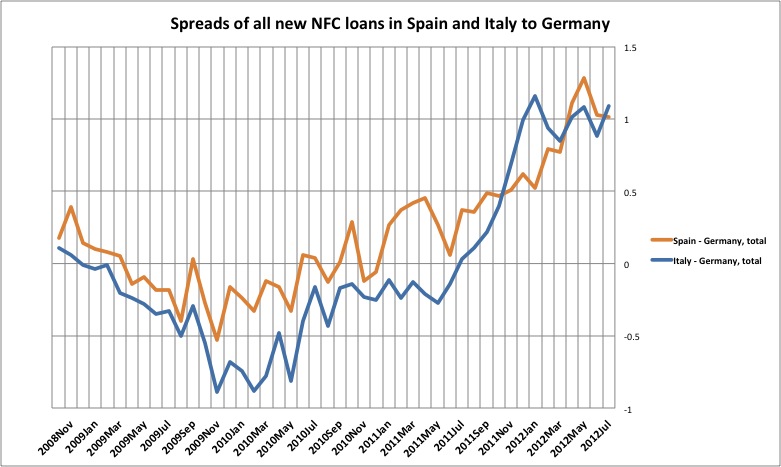 The ECB's choice of the 2.5% spread in Italian over five-year loans looks even more like cherry picking when one sees that the weighted average rate spread of new loans is around 1%, and has been all year.

The data starting in the fall of 2008 show that Spanish and Italian borrowing costs declined vis-a-vis Germany through 2009, and did not start rising from negative levels until spring, 2010. The period of negative spreads in 2009-10 might make one question the ECB's numbers, or recall how German landesbanken had an unsolved problem of toxic assets and a shortage of equity capital, while Spanish authorities were the paragon of thoughtful banking regulation.

Note the recent spread levels: Italian banks have loaned euros to corporations at 100 basis points over Germany rates since December, 2011. And while Spanish corporations saw their rates rise as high as 125 basis points over German corporations in May, the first quarter was lower, and rates did not persist at that high point. Indeed, the same problem from the mortgage example applies here: a 100 basis point spread is simply not wide enough to capture both convertibility risk and "individual credit risk".


Thus these comments should not be taken as skepticism of a convertibility premium in these rates**. However, we do not think the data presented justify such a finding.

**There are aspects of the data that we do not understand. For example, initially floating-rate mortgages of all maturities are categorized as 'up to 1 year' mortgages. We do not yet know the maturities or structures of such loans, and how they can be compared across countries. This is also true for corporates.

Posted by gasherbrum at 3:24 PM