Collateral at the Bank of Italy #2 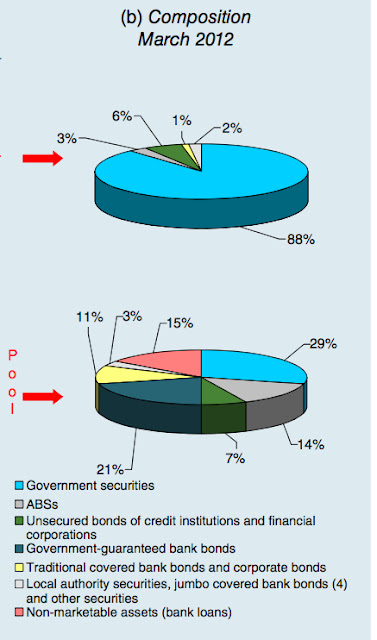 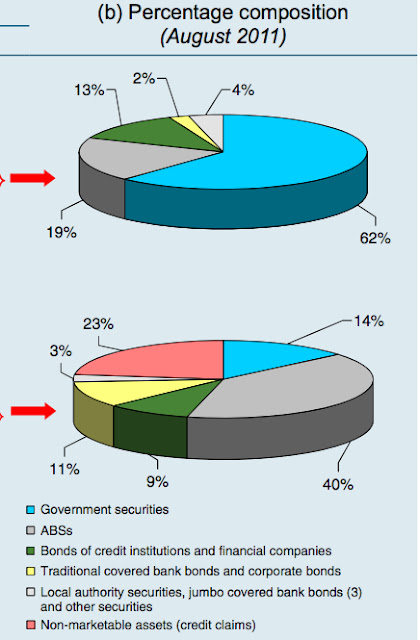 The two graphics show composition of collateral held at the Bank of Italy ("the Bank") against Eurosystem repo operations in August 2011 and March 2012.  In each graphic, the bottom pie represents the collateral actually held at the Bank of Italy, and the top pie represents the Bank’s estimate of unencumbered collateral (net of prospective haircuts) remaining in Italy.  One thing to note, as explained in the the prior post, the amount of collateral net of haircuts at the bank including amount of overcollateralization was 126 billion euros in August and 363 billion in March.

The differences between the pools of collateral held in August and March are stark.  The biggest jump is seen in “government-guaranteed bank bonds” due to an Italian decree issued December 6 (described in this speech by the Gov. of the Bank of Italy, P.11) which allowed banks to issue government backed bonds in return for a fee to the Italian government.  These bonds, which by virtue of the government guarantee were instantly available for financing at the Bank of Italy, represented 77 billion in credit extended by March 2012.  On the other hand, the extension of credit claims represented little additional credit by March; according to the Bank only 4 billion had been extended against whole loans made eligible by the ECB and Bank of Italy’s decision allowing for lowerquality assets to be posted as collateral increasing the total amount of whole loands posted to 54 billion (net of haircuts).

The increase in government securities posted could be caused by several things.  One is, as documented on antehoc before, the subsidy available on Italian government bonds via lower haircuts compared with other European central clearing counterparties.  Another could have to do with the re-domestication of Italian sovereign debt in the last few months (see the picture below again courtesy of the Bank of Italy). 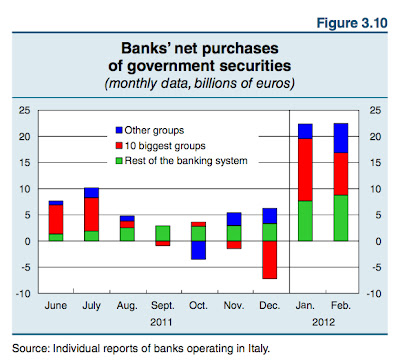